After several attempts, we've finally come up with a laptop mount for Engine 2 that the department likes. This included fabricating a part; none of the commercially available mounts attach to an SCBA seat. We will be producing and selling these parts as well as advertising mount installation to regional FDs. The laptop holds a number of goodies incuding routing, hazmat information, and local preplan data. 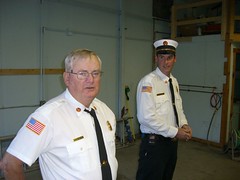 Last night was the surprise retirement party for Sonny Grover, the department's first chief and the chief for the last 39 years. Chief Grover stepped down several months ago.

We lured Chief Grover to the department with a cover story that we were going to be taking department photos at the town hall. I took this picture before we left.

I drove Chief Grover to the dinner in Engine 1. Chief Stapleton asked Grover to show me the location of a particular out-of-the-way dry hydrant (a type of unpressurized hydrant which is essentially a pipe stuck in the ground leading to a pond). Stapleton also asked Grover to make sure my driving was okay giving us an excuse to take longer to arrive at the town hall.

The back route to the town hall by way of the Chowdry Road hydrant leads by a restaurant. Chief Grover was unsuspicious until we pulled to a stop in front of the restaurant and he saw Chief Stapleton standing in front. There were numerous cars with various fire department tags in the parking lot. He realized what was going on when I put on the lights and started to back into the restaurant lot. He declared that 'something fishy is going on' and that 'Stapleton better go to church on Sunday because he lied to me'.

There were seventy-eight people from various fire departments, law enforcement agencies, and Chief Grover's family. His children were present including one son who had secretly flown up from Atlanta.

After the dinner, several people gave remarks which were well received. We presented Chief Grover with a fire axe with a silver head inscribed with our thanks for his 39 years of service. A member of the State Police gave Chief Grover a proclamation from the state's public safety director thanking him.

It was a nice party and Chief Grover seemed to enjoy it.